I don’t have any particular Grand Plan for this version of my website, so I’ve been taking an organic approach of trying this and playing with that, and keeping the stuff I like. One thing I decided I wanted to include early on was something called Pull Quotes.

Pull Quotes are little bits of text that are formatted differently and placed alongside an article, to draw attention to some particular point.

All I wanted was a stupid pull quote. I had one around somewhere (I’d used the example code to start my first plugin) but I couldn’t find it. I tripped over Shortcodes Ultimate instead.

Shortcodes Ultimate has the dubious honor of making me uncomfortable about my philosophy regarding the proper separation of presentation, content, and function. It is a functional element (a plugin) that changes the way content is presented. Furthermore, it places the control of that presentation within the content.

You can argue that that’s what HTML does – place the control of presentation within the content. The only difference is that this plugin does it via shortcodes instead of HTML tags.

Shortcodes are like HTML tags, except using square brackets [ ] instead of less-than and greater-than symbols < >

Another thing that initially bothered me about Shortcodes Ultimate is the sheer number of shortcodes included in a single plugin. There are dozens! Many of which I doubt I will ever use. Code bloat!

However, when you think about it, shortcodes are really small snippets of code, usually not more than just a line or two. By bundling them together you can combine the option screens and database hits and actually get a slight performance benefit over having the same number of shortcodes implemented in separate plugins. Overall I think it’s probably a wash. 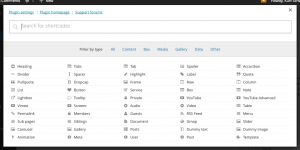 And the options! check out this screen shot. The plugin adds a button to the post editor. pushing it calls up this list of shortcodes to choose from. If you’re overwhelmed by the choices, the blue category links will highlight just the shortcodes in that category, or you can search by name.

Once you’ve made your selection a second screen appears to help you set the attributes of your shortcode. There’s also a live preview available so you can see what it looks like before you commit.

I can go on, but probably the best thing to do is to try it. I have a post here where I’ve done just that.

By the way, I went for the free version available via the WordPress Plugin Repository, but there are several inexpensive paid add-ons available as well. What do you think?